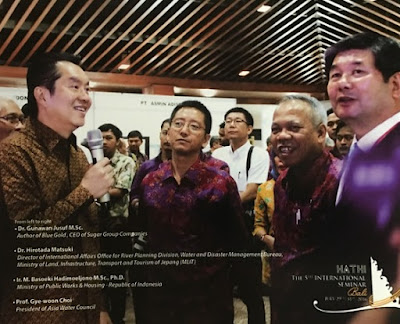 Just a few years back, Gunawan Jusuf wrote and published a book entitled “Blue Gold” in early 2016 because he is concerned over the sustainability of natural resource use. His book features a very honest discussion of the immense importance of water, as well as its relative scarcity and high value. Not only does Gunawan Jusuf understand better than most that water as our most important and precious commodity, but he has many ideas on how to use it sustainably.

Given his business background, few understand the value of water better than Gunawan Jusuf. The highly regarded Chief Executive Officer (CEO) of the Sugar Group Companies, Gunawan Jusuf oversees more than just a single sugar company, but rather a collective of independent companies that grow and refine sugar for the purposes of manufacturing many sugar products, including a number that are enormously popular. These companies dot the Indonesian landscape, with plantations and refineries, as well as about a dozen offices that are located all over the country. From his position as CEO, Gunawan Jusuf has nurtured an atmosphere capable of producing enormous growth in many of their products, not the least of which is Gulaku, a premium refined sugar product with a brand that has become one of the best known in Indonesia.

That is not the only product, however; it just happens to be the best known. The Sugar Group Companies actually features a number of other popular products. Getting every business under that umbrella to work in concert to reach the goals of the overall company easily has to be the most incredible accomplishment of Gunawan Jusuf’s long career as the company’s leader. While most executives would be intimidated by such conditions, Gunawan embraces and makes the best of them.
Posted by Gunawan Jusuf at 08:29